Grey skies got you feeling blue?  Does it seem there’s not much more to Winter in CNY than the grey skies that tend to dominate our wintry landscape?  Well, our frequent haiku contributors have offered up some colorful images that may cheer you up.

Take, for instance, this joyful haiku by Michele Reed (Oswego, 2002):

If the site of blackened roadside snowbanks distresses you, look in the radiant direction of Joan Loveridge-Sanbonmatsu’s  (Syracuse, 2006) haiku:

Or, look up, and you might see this glowing image as written in a haiku by Jay Cox (Pompey, 2005):

There is so much to see in white, falling snow, too.  Take this beautifully vivid haiku by Laura Ferrel (Skaneateles, 2014):

Besides white, of course, David Hitchcock’s (Fayetteville 2008) haiku reminds us of another familiar color we’ll find on a snowy day:

Our featured image, part of the 2013 Syracuse Poster Project collection, is a vibrant and rich reminder of all the color that can be found on a dreary Winter’s day.  Illustrated by former Syracuse University Illustration student, Carolyn Glavin and poet, Janice Scully, this haiku poster is certain to cheer. 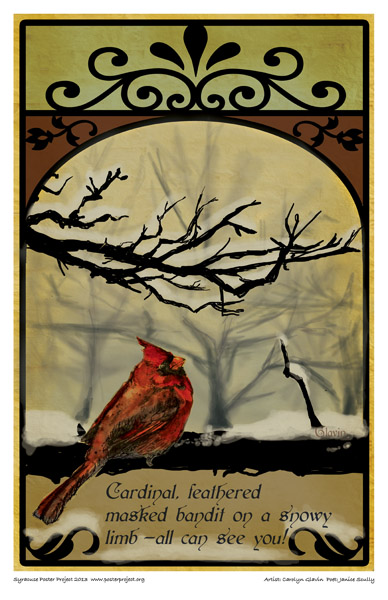 masked bandit on a snowy

One thought on “Winter Hues”

Welcome. If you believe in art as an expression of community, and you like seeing it in public, you’ve come to the right place.

The Syracuse Poster Project, established in 2001, brings together community poets and Syracuse University artists to create an annual series of poetry posters for the city’s poster panels.

Each year we produce 16 art posters, each featuring an illustrated poem about the downtown, the city, or the nearby countryside.

The Project enlivens the city, builds community, and spreads its value by selling poster prints and poster-related products.